E.P. Carrillo The History behind a Master blender

The men behind the name E.P. Carrillo can be recognized by many as the King of Cigars. His reputation grew bigger during 1990 when the cigar-smoking resurge and become a trend. His La Gloria Cubana was considered a premium handmade cigar only compared with Cuban Cigars. La Gloria Cubana Serie R was among the first big range cigars that the cigars connoisseurs get to see on the Retail Shops Shelves. During the time known as the cigar boom, and it was considered a revolution in the world of cigars. Ernesto Perez-Carrillo then sold the line to General Cigars and worked with them for a good ten years. But his comeback to the Cigar industry has been one full of expectations and following. Here is a short preview of Ernesto Perez Carrillo portfolio. 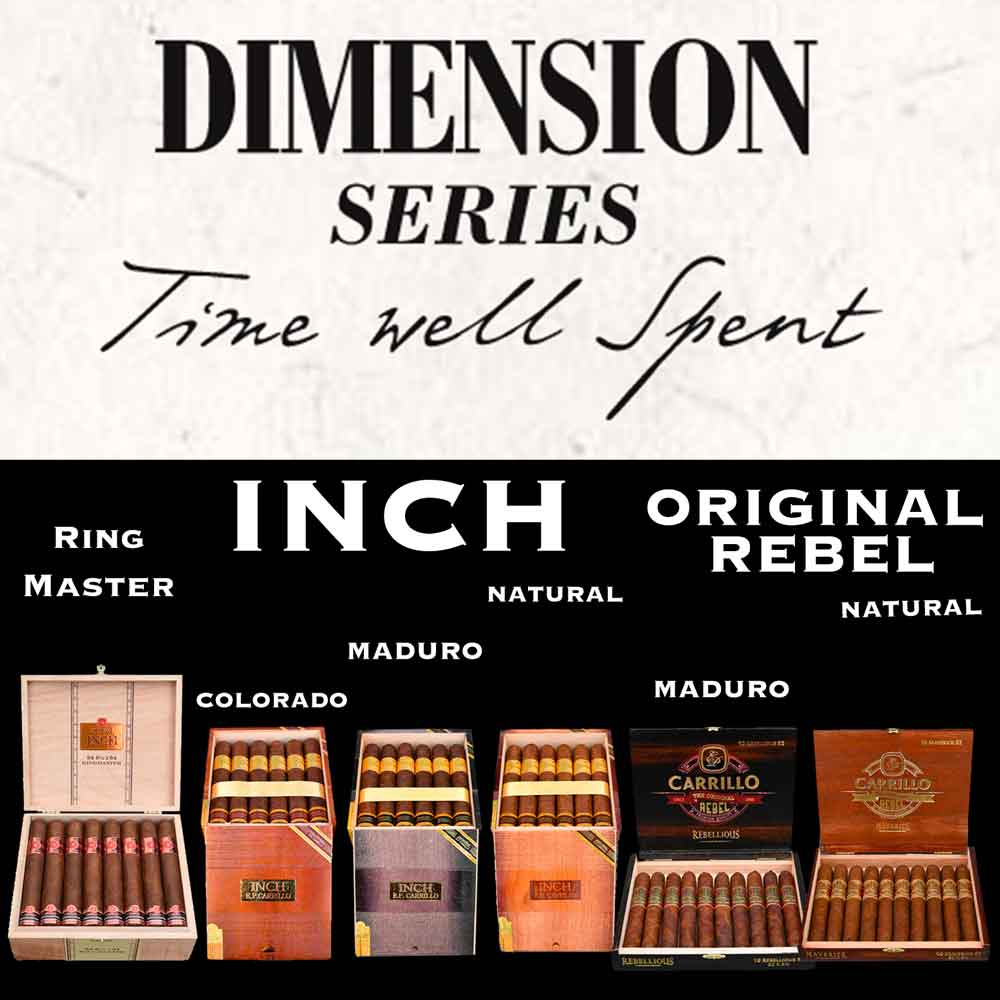 One of the first releases on E.P. Carrillo, under his new venture, was the Dimension Series "Time Well Spent." The line mostly compounds the Inch Series, namely Ring Master, Inch Colorado, Inch Maduro, Inch Natural plus, and the Rebellious and Maverick lines. These cigars are created daily smokes with high-quality tobacco wrapped into Ecuadorian Sumatra and a mixture of tobacco from the Dominican Republic and Nicaragua. They are considered the BIG RING gauge, and they invite you to experience different cigar enjoyment dimensions.

Ernesto Perez Carrillo introducing "The Classic Series" Reinventing Tradition. A series compiling all the handmade cigars that cigar lovers look at in the EPC Portfolio. The Classic Series are premium cigars created for daily smoke without breaking the bank. A vast variety of flavors and strengths to chose from. From cigars fro beginners like New Wave Connecticut to strongest cigars The Dusk Series.

The last of the blends that Ernesto Perez Carrillo is compiled into the Perez Carrillo Series "Generations Honored." The whole line tells the story of the Perez-Carrillo Family. These blends have received the highest rating a cigar line can get, including rated 96 and #1 Best Cigar of the Year by Cigar Aficionado Magazine in 2018. La Historia El Senador, ranked 92 by Cigar Aficionado. The last release of the series is called Pledge. And it looks desirable and beautiful smoke.

Behind every blend released by EP Carillo, there is a beautiful opportunity to find the Best Cigar of the Year or only something cool to smoke. His small-batch releases are always a festive occasion to enjoy a great cigar. He includes his mixtures of Dominican and Nicaraguan Tobaccos grown in various Nicaragua volcanic regions. It gives master blender Ernesto Perez Carrillo the tools to explore his knowledge experience. The Art of cigar making is always something cigar aficionados look after. We are now expecting the 2020 Best Cigar of Year release, and it will not be surprising if Ernesto Perez Carrillo hits that list again.

Here are some of the Best Ratings of the master blender. List of E.P. Carrillo Cigar Ratings:

Are you a cigar lover and have ever tasted La Gloria Cubana? If your answer is yes, then I am sure you will be fond of and addicted to this brand. If I am right to guess, thank E.P. Carrillo, who the mastermind behind is blending this amazingly superb cigar and many others like Pledge Prequel, Encore Majestic, and La Historia E-III. The Cuban American master cigar maker’s full name is Ernesto Perez-Carrillo Jr., and he was born in November 1951 in Cuba. Initially, he was inclined to become a jazz drummer. However, after exhausting his efforts in this field, he moved to Miami, where he later turned into a legendary cigar maker.

In 1976, E.P. Carrillo realized he had been made for cigar making as he found this field extremely interesting. Therefore, he spent his next four years under his father to learn the art of cigar blending. It is also worth mentioning here that his family was already in the cigar-making industry under El Credito's banner. E.P. Carrillo took over EI Credito's reins to further polish his skills and transform him into a master cigar blender.

Finally, he created a perfect cigar La Gloria Cubana under his sole craftsmanship. As soon as this cigar was introduced in the market, it instantly hit the cigar craze of the early 90s. In 1999, though EI Credito was purchased by Swedish Match yet, he worked for them and General Cigar until 2009. However, his family convinced him to be back and blend their own cigars. Eventually, he crafted cigars like La Historia EIII and the Carrillo cigar Encore Majestic that became super hit.

The E.P. Carrillo assorted portfolio of sizes and blends will satisfy the palate of some of the most complex cigar smoker.

➕ How many cigars series E.P. Carrillo has blended?

✒️ How many cigars of E. P. Carrillo have been declared #1 Cigar of the Year?

Entering to the exclusives brands that has more than one Cigar of the Year nominations: Arturo Fuente Cigars, Padron Cigars and E.P. Carrillo.

❌ What is the highest rating Carrillo's cigar has achieved?

↕️ For how many years Carrillo family is involved in cigar blending?

Since 1948 Carrillo family is in the industry of cigar blending when Ernesto Sr. launched the family cigar dynasty EI Credito.

In 1982, when E. P. Carrillo tasted Cuban Davidoff cigar, he felt this is what I am going to replicate in my cigars. Because his motto was “I smoke because I want to feel not just the senses around the palate, but the whole body”.