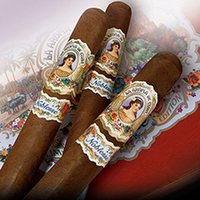 The Noblesse cigars are manufacturer by the Garcia family's at the My Father Cigars factory in Esteli Nicaragua. The 2015 blend will not change and still consists of an Ecuadoran Habano wrapper and two Nicaraguan binders and filler tobacco that comes exclusively from the Garcia's farms. This year release will add another size to the limited edition. La Aroma de Cuba Noblesse 2015 will keep the original Coronation 6 1/2 X 52 but will add a Robusto (Regency) size measuring 5 1/2 X 50.