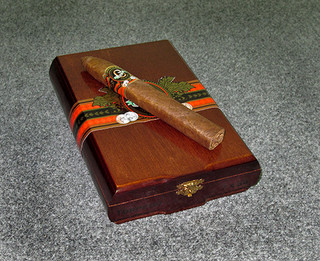 "Cuenca 5 Anniversary", is a medium to full body cigar with a full flavor profile accented with spicy notes. This blend has been specially chosen by Miguel Cuenca. Then, a group of five seasoned smokers at Cuenca Cigars of Hollywood, along with Ana Cuenca were part of the testing process. "This is how we do things at Cuenca Cigars", said Ana Cuenca. We have reinforced our customers’ avid knowledge and palate by allowing them to freely experience the vast selection in our store. In turn, they have become even more sophisticated when making their next choice for a great smoke. When it came time to develop our cigar, we fully engaged them in the development process. Who better than our loyal customers to give us unbiased feedback!

Our goal was to blend a cigar with complexity and a lot of flavor. We did not want to come out with a mild blend; we love spicy and full bodied cigars. Even though, mild may be an easier sale; we want to be known and defined for offering a spicy and strong product. We also love to be “different”, in every possible way. Did you notice the absence of the “th” in 5? We like it like that way, and 5 is a great number for us.

"Cuenca 5 Anniversary" will have an initial batch of 500 boxes. All boxes will be signed by Miguel Cuenca. In 2013, a full line will be released using this same blend. More details will be released early next year.

“Cuenca 5 Anniversary” is a 7 x 54, Torpedo Box pressed, with carefully selected dark Habano wrapper from Nicaragua. It was aged and cured by AJ Fernandez the creator of San Lotano Cigars, a good friend of the Cuenca Family. They come in an elegant cedar box which contains 10 cigars.

Cigars will be initially available in 20 different cigar stores in the Continental U.S. and Europe. By mid 2013, the whole line will be available in 50 U.S. and European stores. The “Cuenca 5 Anniversary” line is a registered trademark of Cuenca Cigars TM and/or affiliated companies.

Check our news for the Cuenca Cigars Fifth Anniversary Party.