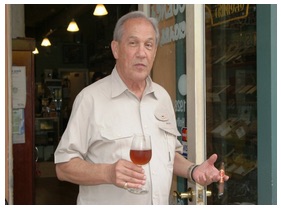 About a month ago I called Berta R. Bravo, “The Guayabera Lady”, to ask her to contact Gary J. Arzt and to offer him a personal invitation to the Montecristo Grand Opening Event. Unfortunately, that was not possible as Gary was already hospitalized.

I had not spoken to him much lately since we all get wrapped up with own busy schedules and tend to forget to check in on friends. A friend was exactly what Gary was to us: a good friend, I most say. I still remember how we meet. We had just opened the cigar shop and not many people knew about us. During those first weeks, Gary paid us an informal visit. At that time, we didn’t even know who he was. He sat with a good friend, which by the way I’m unable to recall his name, on our new black leather chairs. They both spent the entire evening with us. We talked, and talked, and talked non-stop. We did not want him to leave. He gave us guidance and advice.

A year and a half later, he made a second visit to our store, but we remembered him with fond memories from the first time. We still had not figured out how important he was for the cigar industry. It was truly a pleasant second visit. By this time, our leather chairs had gone through some rough abuse and some were torn in certain places. We all laughed and then he lectured us. How come guys? Ana you need to change these chairs, said Gary.

Here comes Facebook, that social media we all love. I got into this world and started to get to know people, and to understand people roles in the cigar industry. As time passed, Cuenca Cigars started to get more exposure, since it was easy to communicate with everybody. So Gary requested to be my friend on Facebook, and everybody knows he did not friend request just anybody. Many evenings we were at the store, and all of a sudden he would appear.

Gary visited the Cuenca family many times. He played dominoes with Miguel and many of our customers. He would fight with them while playing. He learned to say, “Ataca Chicho”, one of Miguel’s favorite phrases. One of those times he came he was on a strict diet, so the Cuban food was forbidden for him. I ran over to Sage for Oysters and brought it to him. He appreciated the kind gesture so much, that he actually commented about it on his following monthly column.

I will always remember him fighting with people who asked to be his friends on Facebook. We will all miss his argumentative, lecturing, and blunt side. But that is what made him special and a good friend too many. I will surely miss his monthly column, which I read unconditionally. I will always think of Winston, his cute dog, and hope he doesn’t miss his master too much.

There is something I will always regret. He wrote me an email on October 14, 2010, in which he says: “I am alternating a “Guest Review” one week, with an article by select tobacconists, like you, the next week. The articles, the first of which appears today by Reagan Jay Starner, who manages City Place Cigar in Lynchburg, VA, is called, “What a Day!” There is inordinate latitude to write whatever the tobacconist wishes to write. I would like you to write a few, for us. If you wish, I will edit it to firm up the English, or, for that matter, Jeff can write it with you. Please let me know what you think…..”

Unfortunately, I was too busy and never got around to doing it. I think I will always owe you that, my friend. I owe you so many things, so many advices, good wishes and the only time you asked me for simple one, I did not come through for you. Sorry Gary, only god and you know how bad I feel about this. 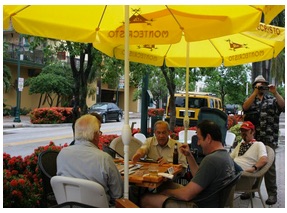 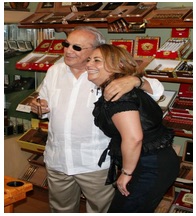 One of the visit he pays to our store. Playing Dominoes at Cuenca's. Don Pepin Event at Cuenca Cigars

In Memory of Gary J. Arzt