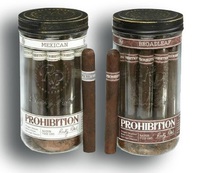 After being announced at the 2014 IPCPR, have certainly made a splash in the cigar industry. In June 2015, the San Andres Toro Prohibition cigar received a rating of 91 from Cigar Aficionado. So what is it that makes this cigar so special?

Rocky Patel Prohibition cigars bring you back about 90 years to American Prohibition. Even the packaging resembles what you would have received if you bought moonshine all those years ago- the cigars are sold in wood crates full of Rocky Patel mason jars. Inside the jars are the cigars, and the blend of the cigar is as unique as the packaging.

With a Nicaraguan filler and binder farmed at Rocky Patel's own farms in Jalapa and Esteli, the tobacco in the Rocky Patel Prohibition cigar is all about good quality. Half of the cigars in each crate use a San Andres Mexican wrapper, and the other half have a Connecticut Broadleaf Maduro wrapper. All of the cigars are made in Nicaragua at the Tavicusa factory.

Available in only one vitola, a Toro, 6 ½ x 52, Rocky Patel Prohibition is available for the best online prices from Cuenca Cigars.