AJ Fernandez keeps rolling out cigars at a furious pace, including those for other companies such as General Cigar and Altadis, but this one is for his own portfolio. The Enclave Broadleaf the first of AJ’s own cigars that utilizes a Connecticut Broadleaf wrapper, and since I was thoroughly impressed with the original Habano wrapped Enclave ( you can read my review for Casas Fumando here), an extension using Broadleaf made it a must-try for me.

The Enclave Broadleaf comes in three sizes: Robusto 5 x 52, Toro 6½ x 54, and Churchill 7 x 52. Although the Fernandez website also lists a 5½ x 58 Gordo, I have not seen it on any online site, so I have to assume that it is not yet available. Production is carried out at Tabacalera A.J. Fernandez Cigars de Nicaragua, in Estelí, Nicaragua. 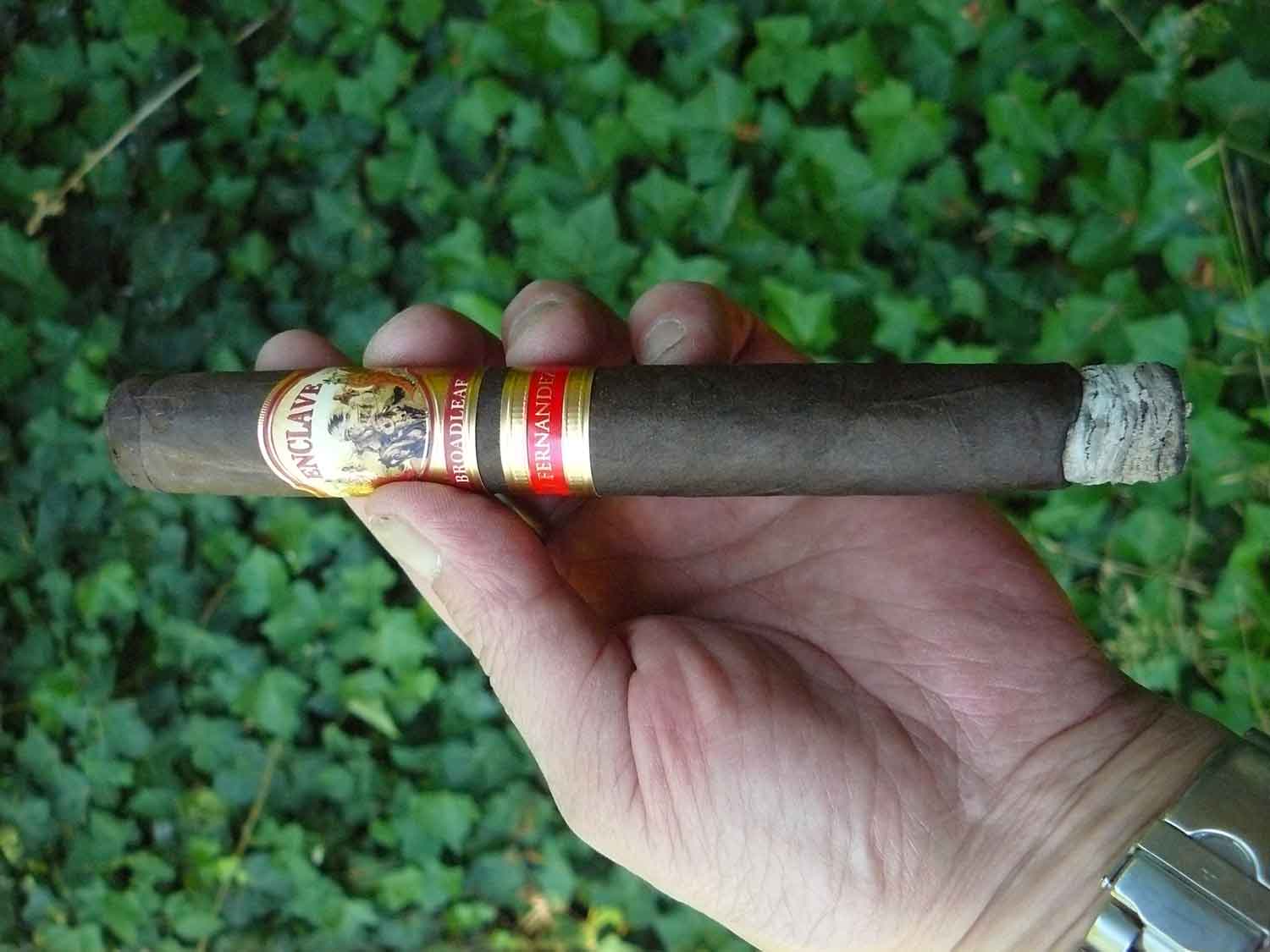 The Enclave Broadleaf presents itself in a rustic, nearly black wrapper that shows some fine to medium veins and areas of toothy texture. The pack is mostly very firm and gets a little softer down near the foot. The scent off of the wrapper is of earth, wood, and light barnyard. The foot, meanwhile, gives off more of a soil and savory cracker-like aroma. The cap cuts easily and cleanly, and the cold draw offers up sweet earth and cocoa.

Immediately after lighting up, the Enclave Broadleaf shows a medium body, with the same sweet earth and mocha flavors, joined by oak, sweet floral spice and white pepper. Smoke production is plentiful and it is pumping out a rather large amount of resting smoke as well. The sweetness increases and the pepper moves back, and by the end of the first third, the cigar has smoothed out considerably. A slight bit of muskiness also comes in.

The middle third of the Enclave Broadleaf brings a transition of the cocoa to a more coffee-like bitterness, as the sweetness also drops down. Earth, coffee, and a little leather drive the flavors forward, with a slight char entering to add to the complexity.

As the Enclave Broadleaf progresses through its final third, the body has moved up into the medium-full range, while the once mild strength also picks up. The sweetness comes back intermittently, as does the pepper bite. Along with the previously noted main flavors, the small amounts of char and musk that have hung around add to the experience and help to hold my interest. The burn has been sharp and even all the way down, and the cigar has never threatened to go out, even when I’ve left it alone for several minutes. 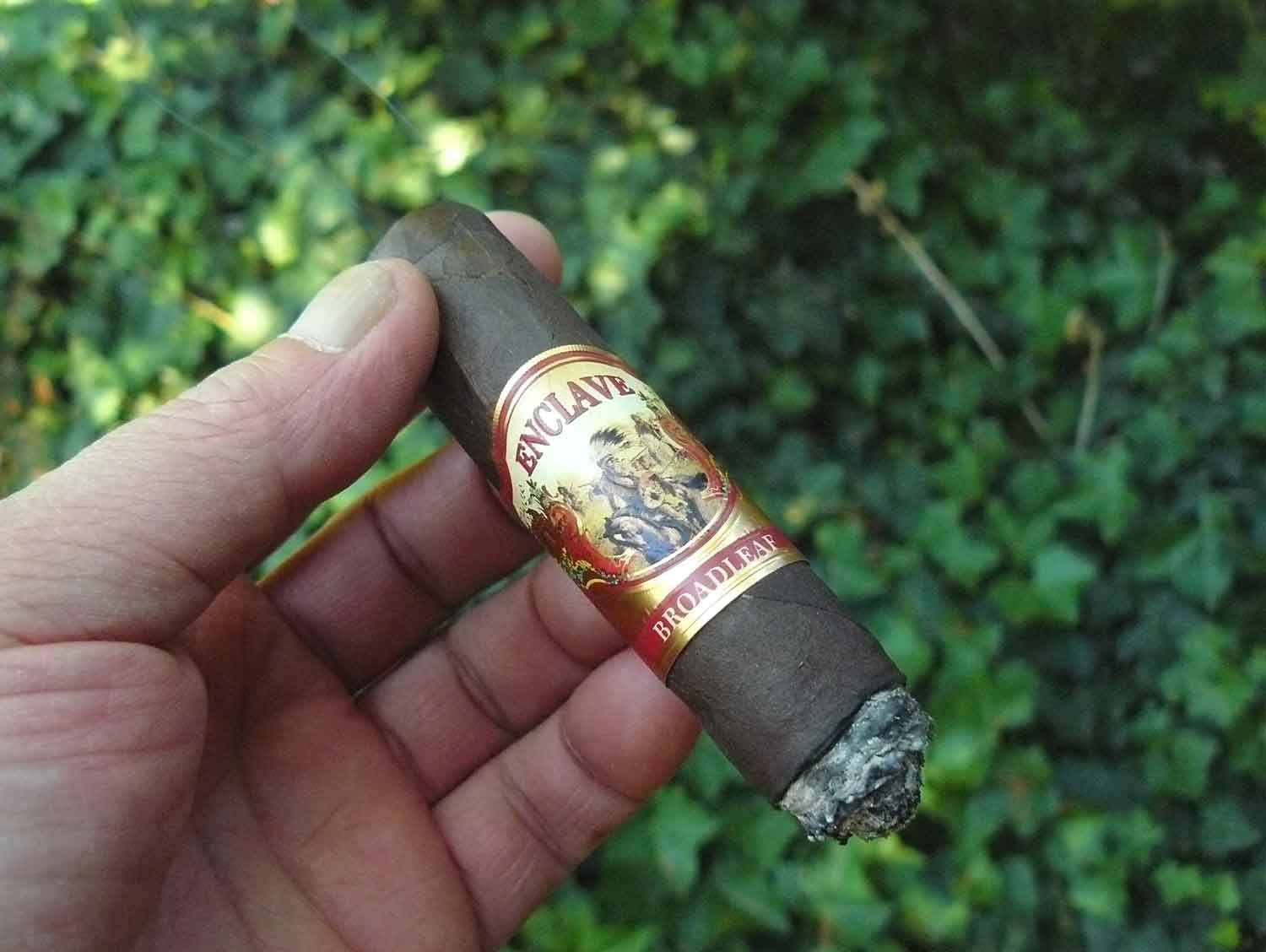 I thought the Enclave Broadleaf is cigar well worth trying and having around, although I would prefer to have more of the sweetness throughout the smoke; I will have to try the Robusto to see if the shorter length would be more conducive to that. Construction and combustion properties were excellent, and it burned nice and slow. In fact, the slower I smoked it, the better the experience I had.

You can get the Enclave Broadleaf from Cuenca Cigars here.

As for pairing suggestions, I paired this cigar with Founders Sumatra Mountain Imperial Brown Ale brewed with Sumatra coffee, which matched up terrifically with the flavors of the Enclave Broadleaf. A coffee infused porter or stout, a strong ale, or a brown ale would all be great pairings, as would a bright, rich port or a sweet, fruity rum.