To truly appreciate the Montecristo 80th Anniversary cigar, you need to understand the history of Montecristo. Professional readers were hired to read books at cigar factories in Cuba in the early 1930's, and and one of the most popular ever Books: The Count of Monte Cristo. The story was so popular at the Particulares Factory that it was almost constantly being read aloud. As a result, a cigar brand was named Montecristo.

To celebrate 80 years of rich history and exceptional cigars, Altadis USA launched the Montecristo 80th Anniversary cigar. The cigar is a tribute to history- it features the unique tobacco from Dominican Republic: Pilotico.

After tobacco seeds were carried over from Cuba by Pepe Mendez in the 1960's, the tobacco was grown in the Navarrete region of the Dominican Republic. This region is known for producing bold and complex flavors in its tobacco, and the Montecristo 80th Anniversary cigar is further evidence of the tobacco's high quality.

The limited edition cigar also has an Ecuadorian Sumatra wrapper and a Dominican binder. The filler is a combination of the rich Dominican pilotico and Nicaraguan viso and ligero. 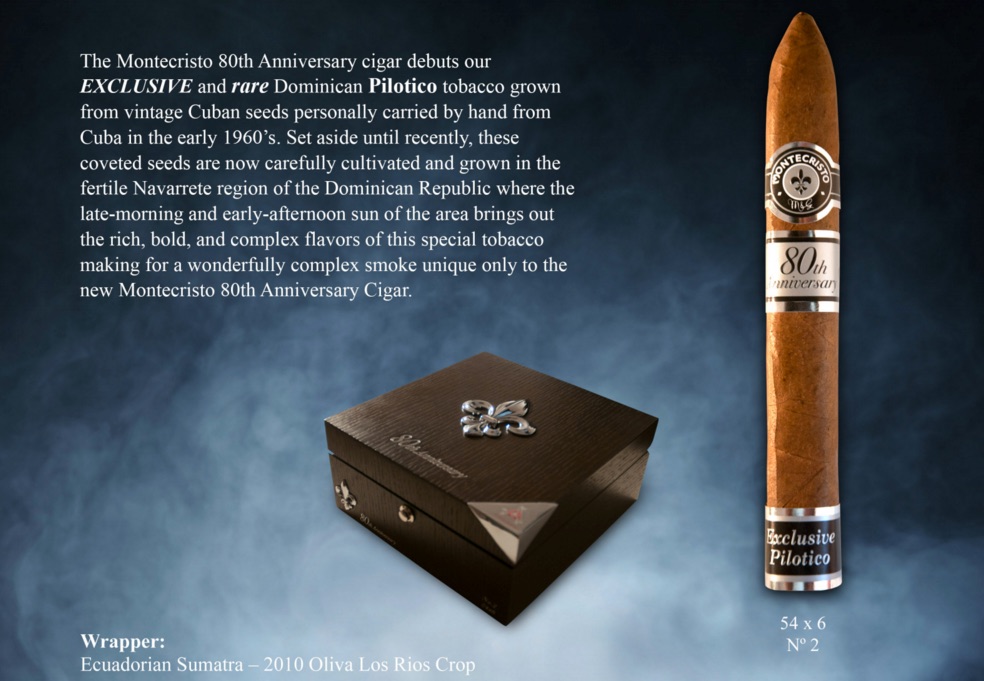 Although the Montecristo 80th Anniversary cigar was launched at the 2015 IPCPR, it won't be available for long. It sold out after the first day of the convention- only 3000 boxes were produced. Available in beautifully hand-carved oak boxes of 12 cigars, you can get yours from Cuenca Cigars for the best online prices. Don't let this tribute to history pass you by.