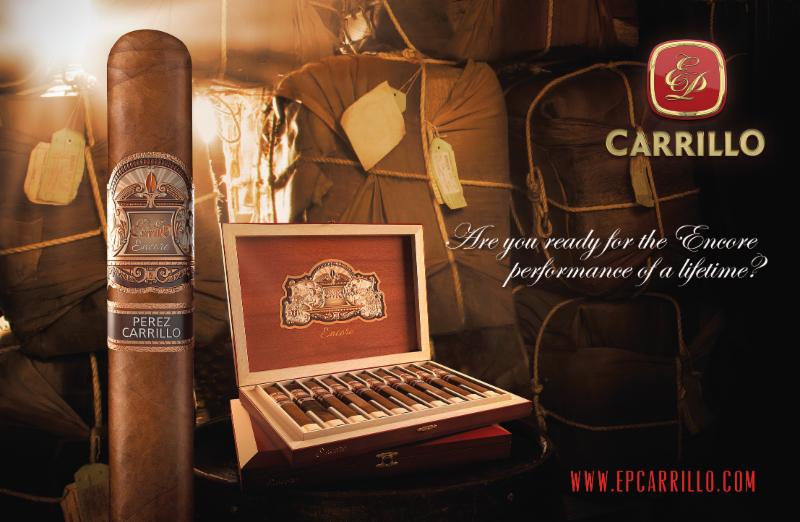 Ernesto Perez Carrillo, known has the Godfather of Boutique Cigars, has released a new Cigar as part of the Family Series. The E.P. Carrillo Family Series Encore could be seen a the Nicaraguan version of the E.P. Carrillo Family Series La Historia, a cigar that won No 2 Cigar of the Year by Cigar Aficionado 2015. It's been only a year and there he comes, Ernesto Perez Carrillo ready to beat the new FDA Cigar Regulations with this precious cigar that is flavorful and delicious. The Encore cigar line comes packaged in boxes of 10 cigars count and the design is similar to LA Historia but using hearty colors. Four different vitolas of the  E.P. Carrillo Family Series Encore has been released: Celestial 6 1/8 X 50, Valientes 6 1/8 x 52, Majestic 5 3/8 x 52 and El Primero 6 3/4 x 54. The cigars are been manufactured at the Dominican Republic Ernesto Carrillo factory Tabacalera La Alianza and uses only Nicaraguan tobacco.

The E.P. Carrillo Family Series Encore was cured and aged in "Tercios".  This procedure is known as the bark from palm trees called yagua, in Spanish. This totally organic and natural leave is used to wrap tobacco in bales. Once the cigars were wrapped, what is left and called the tercios are left untouched for an extended period of time. Then, the yagua and the tobacco leaves enter to a state of symbiosis. If the tobacco leaves are too dry, they draw in humidity from the yagua or if it is to wet then it passes the humidity to the yagua. Two way humidification concept.

We are expecting that this cigars will be hitting the Best Cigar of Year soon enough! E.P. Carrillo Family Series Encore cigars, first released at Cuenca Cigars in Hollywood, Florida is available now at the best online prices.